For centuries, millions of people around the world  have enjoyed the energizing effects of coffee. Incredibly, even after hundreds of years of growth, worldwide coffee consumption remains on the rise. The statistics that follow will help to give you a sense of the awesome scale of the global coffee industry. 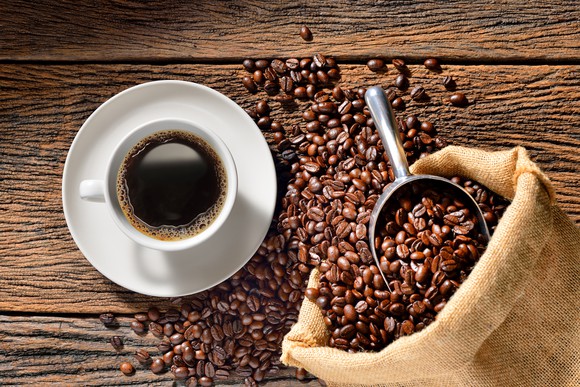 1. An estimated 148 million 60-kilogram bags of coffee were produced worldwide in the 2015-2016 coffee year, which runs from October to September, according to the International Coffee Organization (ICO). That represents a 0.9% increase compared with the previous year period.

2. Still, global coffee consumption outpaced production for the second straight year. The ICO estimates that 151.3 million bags of coffee were consumed in the 2015-2016 period, representing 1.3% annualized growth since the 2012-2013 coffee year.

4. The average U.S. coffee drinker consumes 2.7 cups per day, with the average size of a coffee cup measuring 9 ounces.

5. In total, approximately 150 million Americans drink 400 million cups of coffee per day -- or more than 140 billion cups per year -- making the United States the leading consumer of coffee in the world.

6. In turn, the retail value of the U.S. coffee market is estimated to be $48 billion, according to the National Coffee Association (NCA).

7. As a further testament to America's love affair with coffee, 31% of coffee drinkers make coffee the most important part of a morning, brewing a cup first before any other morning behavior, according to The Huffington Post. And 52% of coffee drinkers would forgo a shower to make time for their morning cup of joe.

8. Moreover, 26% of U.S. coffee drinkers consider themselves addicted to coffee, reports Gallup. Yet just 10% want to cut back. In contrast, Gallup typically finds that seven in 10 smokers believe they are addicted to cigarettes, with about the same proportion expressing a desire to quit.

9. Workplace coffee consumption has trended up from a low of 16% in 2013 to 21% in 2016, according to a report by the National Coffee Association. Yet 54% of coffee drinkers stated that they are still less than "very satisfied" with their workplace coffee situation.

10. Additionally, the NCA notes that 21% of coffee drinkers would be interested in having ready-made coffee delivered to their home or workplace, while 16% would consider having freshly roasted ground coffee sent to their home, according to market research firm Mintel.

11. Seattle has 10 times more coffee stores per 100,000 residents than the United States has overall.